Units of solubility is molarity or M (mol solute/L solution). The solubility of a substance fundamentally depends on the physical and chemical properties of the solute and solvent as well as on temperature, pressure and the pH of the solution. Ionic solids (or salts) contain positive and negative ions, which are held together by the strong force of attraction between particles with opposite charges. When one of these solids dissolves in water, the ions that form the solid are released into solution, where they become associated with the polar solvent molecules. 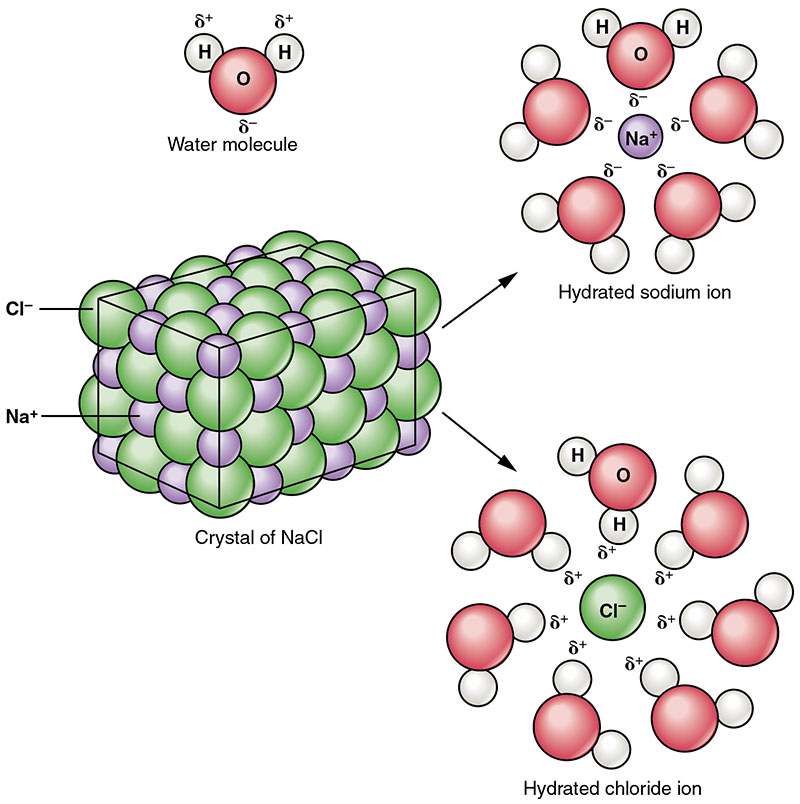 The Common Ion Effect is the effect of adding an ion common to one already in equilibrium in a solubility reaction to lower the solubility of the salt. Let us use AgBr solubility:

The addition of either Ag+ or Br– ions will shift the equilibrium to the left, in accord with Le Chatelier’s principle, thus decreasing the amount of AgBr dissolved. Ag+ ions can be added by pouring in a solution of AgNO3. Recall that AgNO3 is very soluble, and is a strong electrolyte.

The nitrate ion will not interfere with AgBr solubility because it is not a common ion. Additional Br– ions could be supplied by adding NaBr, for instance. Sodium bromide is very soluble and is a strong electrolyte.

The sodium ion will not affect the solubility of AgBr because it is not a common ion. Here we see that the addition of an ion that is common to one already in the solubility equilibrium shifts the equilibrium to the left, which decreases the solubility. This is equivalent to the case of a weak acid, where the presence of a common ion decreases the percent ionization. In laboratory separations, you can use the common ion effect to selectively crashing out one component in a mixture. For example, if you want to separate AgCl from a mixture of AgCl and Ag2SO4, then you can do so by adding NaCl. This will selectively crash out AgCl by the common ion effect (Cl- being the common ion).

The pH can affect the solubility of a solute in two ways. One of these is through the common ion effect. Consider the solubility equilibrium of an insoluble hydroxide such as calcium hydroxide:

Upon the addition of NaOH, for instance, the pH of the solution will increase. The equilibrium position will shift to the left because of the added OH– ion (a common ion); therefore the solubility of Ca(OH)2 will decrease proportionately. The other case in which pH can affect solubility is when a salt contains a basic anion such as F–. Any basic anion will react with H+ ions present in the solution and thereby affect the solubility of the salt. For instance, the effect of adding a strong acid on the solubility of silver acetate. To explain this we need two reaction steps. In the first one silver acetate dissolves, and in the second the acetate ion combines with aqueous H+ ions present in the system:

In the presence of H+ ions the concentration of acetate ion is lowered by the occurrence of the second reaction. The second reaction occurs essentially completely because it forms a weak acid. According to Le Chatelier’s principle, the solubility equilibrium will shift to the right, causing more silver acetate to dissolve.

An ion made up of a metal ion bonded to one or more molecules or ions is called a complex ion. One example is Ag(NH3)2+. Complex ions are extremely stable and so have an important effect on certain chemical species in solution. A measure of the tendency of a metal ion to form a certain complex ion is given by its formation constant, Kf.

The formation of a complex ion has a strong effect on the solubility of a metal salt. For example, AgI, which has a very low solubility in water, will dissolve in an aqueous solution of NaCN (a complex ion). The “complex ion effect” is the opposite of the common ion effect.

4) California, U. o. (2016, December 14). The Formation of Complex Ions. Retrieved from https://chem.libretexts.org/Textbook_Maps/General_Chemistry_Textbook_Maps/Map%3A_Chemistry_(Averill_and_Eldredge)/17%3A_Solubility_and_Complexation_Equilibria/17.3%3A_The_Formation_of_Complex_Ions