Enzymes are biological catalysts that are highly specific, catalyzing a single chemical reaction or a very few closely related reactions.1 The function of catalysts is to speed up reactions without becoming a part of the reaction products. The structure of an enzyme determines its functionality. A change in the structure of an enzyme will result in a change in its function. Factors which can influence the structure of an enzyme includes temperature and pH. Some important biological reactions catalyzed by enzymes are biometabolism, DNA synthesis, RNA synthesis, protein synthesis and digestion. The main divisions and subclasses of enzymes are oxidoreductases, transferases, hydrolases, lyases, isomerases and ligases. Oxidoreductases are all enzymes that catalyse oxidoreduction reactions. The substrate that is oxidized is regarded as hydrogen donor. The systematic name is based on donor:acceptor oxidoreductase. The common name of these enzymes usually end with “dehydrogenase”, wherever possible. The name “reductase” can be used as an alternative to “dehydrogenase”. The name oxidase is only used in cases where O2 is the acceptor.  Transferases are enzymes that transfer a group (like a methyl group) from one compound (generally regarded as donor) to another compound (generally regarded as acceptor). The systematic names are formed according to the scheme donor:acceptor grouptransferase. The common names are normally formed according to acceptor grouptransferase or donor grouptransferase. In many cases, the donor is a cofactor (coenzyme) charged with the group to be transferred. Hydrolases are enzymes that catalyse the hydrolytic cleavage of C-O, C-N, C-C and some other bonds, including phosphoric anhydride bonds. Although the systematic name always includes hydrolase, the common name is formed by the name of the substrate with the suffix “-ase”. It is understood that the name of the substrate with this suffix means a hydrolytic enzyme. Lyases are enzymes cleaving C-C, C-O, C-N, and other bonds by elimination, leaving double bonds or rings, or conversely adding groups to double bonds. The systematic name is formed according to the pattern substrate group “-lyase”. The hyphen is an important part of the name, and to avoid confusion should not be omitted (e.g. “hydro-lyase: not “hydrolyase”). In the common names, expressions like decarboxylase, aldolase, dehydratase (in case of elimination of CO2, aldehyde, or water) are used. In cases where the reverse reaction is much more important, or the only one demonstrated, synthase (not synthetase) may be used in the name. Isomerases are enzymes that catalyse geometric or structural changes within one molecule. According to the type of isomerism, they may be called racemases, epimerases, cis-trans-isomerases, isomerases, tautomerases, mutases or cycloisomerases. In some cases, the interconversion in the substrate is brought about by an intramolecular oxidoreduction. However, since hydrogen donor and acceptor are the same molecule and no oxidized product appears, they are not classified as oxidoreductases, even though they may contain firmly bound NAD(P)+. Ligases are enzymes catalysing the joining together of two molecules coupled with the hydrolysis of a diphosphate bond in ATP or a similar triphosphate. Enzymes function as a catalyst by reducing the activation energy of a reaction, thus speeding up the rate of the reaction.

Enzymes decrease the activation energy (Ea) of a reaction by lowering the energy of the transition state. Enzymes will increase the rate constant, k, for the equation rate:

Enzymes do not change the Keq of a reaction because it lowers the activation energy for both the forward and reverse reactions. Enzymes do not change ΔG, the net change in free energy. Enzymes will affect the kinetics of a reaction but not the thermodynamics. Enzyme-substrate interactions occur at the enzyme’s active site and the enzyme-substrate specificity derives from structural interactions between the two. Specificity is achieved by binding pockets with complementary shape, charge and hydrophilic/hydrophobic characteristics to the substrates. Enzymes can therefore distinguish between very similar substrate molecules to be chemoselective, regioselective and stereospecific. Chemoselectivity refers to the selective reactivity of one functional group in the presence of others Regioselectivity is the preference of one direction of chemical bond making or breaking over all other possible directions.

Enzymes experience saturation kinetics: as substrate concentration increases, the reaction rate does as well until a maximum value is reached. Michaelis–Menten plots represent this relationship as a hyperbola and line, respectively. 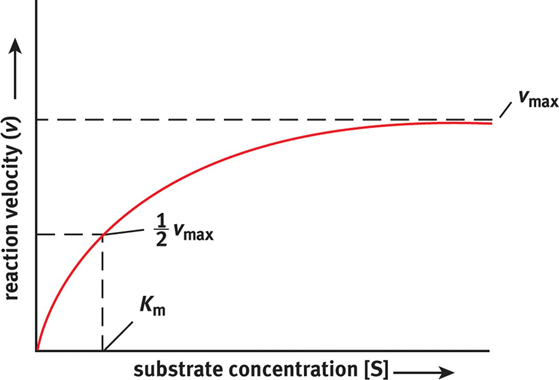 Enzymes can be compared on the basis of their Km and vmax values.1 The concentrations of the substrate, [S], and enzyme, [E], greatly affect how quickly a reaction will occur. As the amount of substrate increases, the enzyme is able to increase its rate of reaction until it reaches a maximum enzymatic reaction rate (vmax). Once vmax is reached, adding more substrate will not increase the rate of reaction. For most enzymes, the Michaelis–Menten equation describes how the rate of the reaction, v, depends on the concentration of both the enzyme, [E], and the substrate, [S], which forms product, [P]. Enzyme–substrate complexes form at a rate k1. The enzyme-substrate complex can either dissociate at a rate k2 or turn intodnzyme + P at a rate k3:

Note that in either case, the enzyme is again available. Under these conditions, we can relate the velocity of the enzyme to substrate concentration using the Michaelis–Menten equation: 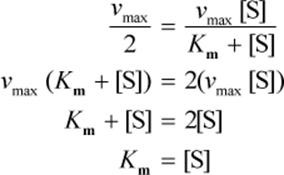 Enzymes that are allosteric have multiple binding sites. The active site is present, as well as at least one other site that can regulate the availability of the active site. These are known as allosteric sites. Allosteric enzymes alternate between an active and an inactive form. The inactive form cannot carry out the enzymatic reaction. Molecules that bind to the allosteric site may be either allosteric activators or allosteric inhibitors. Binding of either causes a conformational shift in the protein; however, the effect differs. An activator will result in a shift that makes the active site more available for binding to the substrate, whereas an inhibitor will make it less available. In addition to being able to alter the conformation of the protein, binding of activators or inhibitors may alter the activity of the enzyme. Michaelis–Menten plots of cooperative allosteric enzyme kinetics often have a sigmoidal (S-shaped) curve. In addition to transient interactions, enzymes are often subject to covalent modification. Enzymes can be activated or deactivated by phosphorylation or dephosphorylation. One cannot predict whether phosphorylation or dephosphorylation will activate an enzyme without experimental determination. Glycosylation, the covalent attachment of sugar moieties, is another covalent enzyme modification. Glycosylation can tag an enzyme for transport within the cell, or can modify protein activity and selectivity.

Fat metabolism, via beta-oxidation, occurs in the matrix of the mitochondria. Ester hydrolysis, on the other hand, occurs in the cytosol. Fatty esters gets hydrolyzed into free fatty acids by lipases. For example, triacylglycerol gets hydrolyzed into free fatty acids and glycerol. With the help of ATP, the fatty acid is activated at the acid end by CoA, which turns it into a thioester. Beta-oxidation breaks down the fatty-CoA, 2 carbons at a time, to make acetyl CoA. β-oxidation also produces FADH2 and NADH. The acetyl CoA feeds into the Krebs cycle, and the FADH2 and NADH feed into the electron transport chain. Fats give more energy than any other food source, on a per gram basis. Proteins are broken down into amino acids by peptidases. The nitrogen in the amino acid is converted to urea and the carbon in the amino acid is converted to pyruvate or acetyl-CoA. It can also be converted to other metabolical intermediates such as oxaloacetate, depending on what amino acid it is. The carbon products from amino acid metabolism can either feed into the Krebs cycle, or be the starting material for gluconeogenesis.

The activity of an enzyme is heavily influenced by its environment; in particular, temperature, acidity or alkalinity (pH), and high salinity have significant effects on the ability of an enzyme to carry out its function. Enzyme-catalyzed reactions tend to double in velocity for every 10°C increase in temperature until the optimum temperature is reached. For the human body, this is 37°C and after this, activity falls off sharply, as the enzyme will denature at higher temperatures. Some enzymes that are overheated may regain their function if cooled.

Figure 2. Effects of Temperature and pH on the Rate of Enzyme Action

Most enzymes also depend on pH in order to function properly, not only because pH affects the ionization of the active site, but also because changes in pH can lead to denaturation of the enzyme.1 For enzymes that circulate and function in human blood, this optimal pH is 7.4. A pH < 7.35 in human blood is termed acidemia. Even though it’s more basic than chemically neutral 7.0, it is more acidic than physiologically neutral 7.4. While the effect of salinity or osmolarity is not generally of physiologic significance, altering the concentration of salt can change enzyme activity in vitro. Increasing levels of salt can disrupt hydrogen and ionic bonds, causing a partial change in the conformation of the enzyme, and in some cases causing denaturation.