An isolated system is one where there is no exchange of heat, work, or matter with the surroundings while a closed system is one where there is an exchange of heat and work, but not matter with the surroundings. An open system is one where all three are exchanged with the surroundings. A state function is path-independent and depends only on the initial and final states. State functions include ΔH (enthalpy), ΔS (entropy), ΔG (free energy change) and ΔU (internal energy change). A state function is also called a state quantity or function of state. Zeroth law (concept of temperature) of thermodynamics states that heat flows from hot objects to cold objects to achieve thermal equilibrium. Mathematically, if TA = TB, and TB = TC, then TA = TC, where T is the temperature. The first law states that:

The first law of thermodynamics is based on the principle of conservation of energy and it states that the change in total internal energy of a system is equal to the contributions from heat and work. ΔE is the same thing as ΔU, which is the change in internal energy and Q is the contribution from heat. Q is positive when heat is absorbed into the system (ie. heating it) while Q is negative when heat leaks out of the system (ie. cooling it). W refers to the contribution from work, which is positive when work is done on the system (ie. compression) and negative when work is done by the system (ie. expansion). Energy is measured in Joules. Whether it is potential energy, kinetic energy or any energy, it has the unit Joules. Energy is equivalent even if they are in different forms. For example, 1 Joule of mechanical energy can be converted into 1 Joule of electrical energy (ignoring heat loss).

Isobaric process is one where pressure is constant and:

Isovolumetric (isochoric) process is when volume is constant and:

Work done is the area under or enclosed by the curve.

The second law of thermodynamics states that things like to be in a state of higher entropy and disorder. Entropy is a measure of disorder and is found by the equation:

Where q is the heat transferred and T is the temperature in Kelvin.

Heat absorbed / heat input is given by the formula:

Where m is mass, c is specific heat and ΔT is change in temperature.

For example, to calculate how much energy it takes to heat ice from -20 °C to water at 37 °C, there are 3 components to this question:

For the phase transition, use heat of fusion:

If the heat of fusion is given in energy per mass, then it should be multiplied by the mass to get energy.

Free energy is the energy available that can be converted to do work and is given by the formula:

The energy it takes to vaporize a liquid is:

Latent heats can also be expressed as J / mass, where energy can be obtained by multiplying the latent heats by the mass of the substance. Energy is released when either a gas condenses into a liquid, or when a liquid freezes into a solid. The energy released is the same as the energy of their reverse processes (see formula above).

A phase diagram is a graphical representation of the physical states of a substance under different conditions of temperature and pressure. A typical phase diagram has pressure on the y-axis and temperature on the x-axis. As we cross the lines or curves on the phase diagram, a phase change occurs. In addition, two states of the substance coexist in equilibrium on the lines or curves. A phase transition is the transition from one state of matter to another. There are three states of matter: liquid, solid, and gas. A liquid is a state of matter that consists of loose, free moving particles which form the shape set by the boundaries of the container in which the liquid is in. One may notice that some liquids flow readily whereas some liquids flow slowly. A liquid’s relative resistance to flow is viscosity. A solid is a state of matter with tightly packed particles which do not change the shape or volume of the container that it is in. However, this does not mean that the volume of a solid is a constant. Solids can expand and contract when temperatures change. Solids have strong intermolecular forces that keep particles in close proximity to one another. All true solids have crystalline structures. This means that their particles are arranged in a three-dimensional, orderly pattern.  Solids will undergo phase changes when they come across energy changes. A gas is a state of matter where particles are spread out with no definite shape or volume. The particles of a gas will take the shape and fill the volume of the container that it is placed in. In a gas, there are no intermolecular forces holding the particles of a gas together since each particle travels at its own speed in its own direction. Phase diagrams illustrate the variations between the states of matter of elements or compounds as they relate to pressure and temperatures. The following is an example of a phase diagram for a generic single-component system: 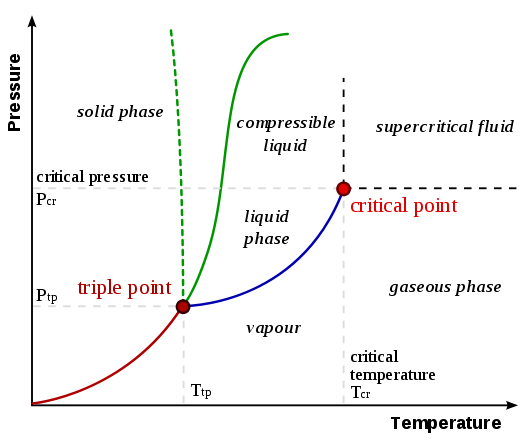