In the Bohr model, an electron orbits the positively charged nucleus in the same way that the earth orbits the Sun. Electrostatic attraction pulls the electron toward the nucleus and the electron orbits at high speed to prevent it from crashing into the nucleus. The electron can orbit at different energy levels (n=1, n=2, n=3) and the higher the energy level, the larger the radius from the nucleus. When an electron transitions from a higher energy level to a lower energy level, it emits electromagnetic radiation. The emission spectrum of hydrogen consists of sharp, distinct lines.1 The distinct lines of the emission spectrum prove that electron energy is quantized into energy levels. If electron energy is not quantized, then a continuous spectrum would be observed. The energy of the energy levels is governed by:

, where E is energy and n is the energy level.

The equation is negative, so all energies are negative. Negative energies mean that it is energy that contributes to the “stability” of the system – the electron binding energy. The more negative (lower) the energy, the more stable the orbit, the harder it is to knock out the electron. The less negative (higher) the energy, the less stable the orbit and the easier it is to knock out the electron. At the highest energy, 0 eV, there is no binding energy, so the electron dissociates. For atoms other than hydrogen, the shape of the energy level curve stays the same. However, the numerator is a constant other than 13.6 eV. The precise relationship for atoms other than hydrogen is:

, where Z is the atomic number.

Higher Z values give more negative binding energy (more stable) because the more charge, the more electrostatic attraction. The wavelength of the emitted or absorbed radiation is governed by the Rydberg formula:

The energy of the emitted or absorbed radiation is:

, where E is energy, f and v both mean frequency and c is the speed of light.

Aufbau principle states that shells / subshells of lower energy gets filled first.4 For example, 1s fills first, then 2s, then 2p and so on. Note, however, that the d subshells get filled after the s.

Hund’s rule state that when you fill a subshell with more than 1 orbital (p, d, f), you first fill each orbital with a single electron and with the same spin The reason for Hund’s rule is that electron-electron repulsion in doubly occupied orbitals make them higher in energy than singly occupied orbitals.

Pauli Exclusion Principle states that 2 electrons in the same orbital must be of different spins. Modern atomic theory postulates that any electron in an atom can be completely described by four quantum numbers: n, l, ml, and ms. Furthermore, according to the Pauli Exclusion Principle, no two electrons in a given atom can possess the same set of four quantum numbers. The position and energy of an electron described by its quantum numbers is known as its energy state. The value of n limits the values of l, which in turn limit the values of ml. In other words, for a given value of n, only particular values of l are permissible; given a value of l, only particular values of ml are permissible. The values of the quantum numbers qualitatively give information about the orientation of the orbitals. 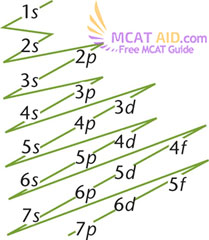 Bohr came to describe the structure of the hydrogen atom as a nucleus with one proton forming a dense core, around which a single electron revolved in a defined pathway (orbit) at a discrete energy value. If one could transfer an amount of energy exactly equal to the difference between one orbit and another, this could result in the electron “jumping” from one orbit to a higher-energy one. These orbits had increasing radii, and the orbit with the smallest, lowest-energy radius was defined as the ground state (n = 1). More generally, the ground state of an atom is the state of lowest energy, in which all electrons are in the lowest possible orbitals. In Bohr’s model, the electron was promoted to an orbit with a larger radius (higher energy), the atom was said to be in the excited state. In general, an atom is in an excited state when at least one electron has moved to a subshell of higher than normal energy. Bohr likened his model of the hydrogen atom to the planets orbiting the sun, in which each planet traveled along a roughly circular pathway at set distances (and energy values) from the sun. Bohr’s model was reconsidered over the next two decades, but remains an important conceptualization of atomic behavior. In particular, we now know that electrons are not restricted to specific pathways, but tend to be localized in certain regions of space.

At room temperature, the majority of atoms in a sample are in the ground state. However, electrons can be excited to higher energy levels by heat or other energy forms to yield excited states. Because the lifetime of an excited state is brief, the electrons will return rapidly to the ground state, resulting in the emission of discrete amounts of energy in the form of photons.

The electromagnetic energy of these photons can be determined using the following equation:

where h is Planck’s constant, c is the speed of light in a vacuum and λ is the wavelength of the radiation. The electrons in an atom can be excited to different energy levels. When these electrons return to their ground states, each will emit a photon with a wavelength characteristic of the specific energy transition it undergoes. These energy transitions do not form a continuum, but rather are quantized to certain values. Thus, the spectrum is composed of light at specified frequencies. It is sometimes called a line spectrum, where each line on the emission spectrum corresponds to a specific electron transition. Because each element can have its electrons excited to a different set of distinct energy levels, each possesses a unique atomic emission spectrum, which can be used as a fingerprint for the element. When an electron is excited to a higher energy level, it must absorb exactly the right amount of energy to make that transition. This means that exciting the electrons of a particular element results in energy absorption at specific wavelengths. Thus, in addition to a unique emission spectrum, every element possesses a characteristic absorption spectrum. Not surprisingly, the wavelengths of absorption correspond exactly to the wavelengths of emission because the difference in energy between levels remains unchanged. Identification of elements in the gas phase requires absorption spectra. Absorption is the basis for the color of compounds. We see the color of the light that is not absorbed by the compound.

While Bohr’s model marked a significant advancement in the understanding of the structure of atoms, his model ultimately proved inadequate to explain the structure and behavior of atoms containing more than one electron. Bohr’s model states that electrons follow a clearly defined circular pathway or orbit at a fixed distance from the nucleus but we now understand that electrons move rapidly and are localized within regions of space around the nucleus called orbitals.  In the current quantum mechanical model, it is impossible to pinpoint exactly where an electron is at any given moment in time. This is expressed best by the Heisenberg uncertainty principle which states that it is impossible to simultaneously determine, with perfect accuracy, the momentum and the position of an electron.4 If we want to assess the position of an electron, the electron has to stop (thereby removing its momentum) and if we want to assess its momentum, the electron has to be moving (thereby changing its position).

Where E is the energy of the photon of light, h is Planck’s constant (6.626 × 10−34 J · s), and f is the frequency of the light.3 Once we know the frequency, we can easily find the wavelength λ, according to the equation: