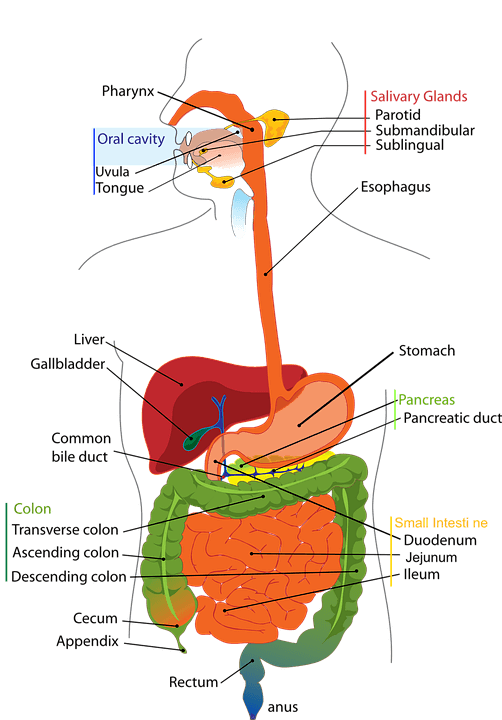 Path to the Stomach

The liver is also a part of the digestive system. It makes bile from cholesterol and stores it in the gallbladder. The liver facilitates nutrient metabolism and vitamin storage It makes and stores glycogen from glucose and breaks down fat. It detoxifies the body. An example is the removal of ammonia from blood. The liver is the largest gland in the body, spanning both sides of the abdomen. It has ducts that drain to the duodenum and gall bladder. The gall bladder stores excess and unused bile. It concentrates the bile and secretes it when needed. Bile is an emulsifying agent that breaks down large fat droplets into smaller droplets by forming micelles. This increases the total surface area of the fat for lipase action.

Bicarbonate ions from the pancreas neutralizes the HCl from the stomach, which facilitates the activity of enzymes in the small intestine, which would be denatured by stomach pH.

The blood delivers the nutrients to the rest of the body. The waste products of the digestive process include undigested parts of food and older cells from the GI tract lining. Muscles push these waste products into the large intestine. The large intestine absorbs water and any remaining nutrients and changes the waste from liquid into stool. Unlike the small intestine, the large intestine has no folds or villi. The rectum stores stool until it pushes stool out of the body during a bowel movement. The small intestine absorbs most digested food molecules, as well as water and minerals, and passes them on to other parts of the body for storage or further chemical change. Specialized cells help absorbed materials cross the intestinal lining into the bloodstream. The bloodstream carries simple sugars, amino acids, glycerol, and some vitamins and salts to the liver. The lymphatic system, a network of vessels that carry white blood cells and a fluid called lymph throughout the body, absorbs fatty acids and vitamins. The cardiac sphincter prevents back flow of food while the pyloric sphincter releases food into the small intestine in a small amount at a time.