A Lewis structure, or Lewis dot diagram, is the chemical symbol of an element surrounded by dots, each representing one of the sigma or pi valence electrons of the atom.1 In drawing Lewis dot structures, remember that some atoms can expand their octets by utilizing the d-orbitals in their outer shell. This will only take place with atoms in period 3 or greater. The total number of electrons represented in a Lewis structure is equal to the sum of the numbers of valence electrons on each individual atom. Non-valence electrons are not represented in Lewis structures. The number of dots in Lewis Structure notation comes from group numbers. Lithium is in Group I and therefore has one electron (dot). Carbon is in Group IV and has four dots. Certain rules must be followed in assigning a Lewis structure to a molecule. The steps for drawing a Lewis structure are outlined here, using HCN as an example. Draw out the backbone of the compound—that is, the arrangement of atoms. In general, the least electronegative atom is the central atom. Hydrogen (always) and the halogens F, Cl, Br, and I (usually) occupy a terminal position. In HCN, H must occupy an end position. Of the remaining two atoms, C is the least electronegative and, therefore, occupies the central position. Therefore, the skeletal structure is as follows:

Any extra electrons remaining is placed on the central atom. If the central atom has less than an octet, try to write double or triple bonds between the central and surrounding atoms using the lone pairs on the surrounding atoms. The HCN structure above does not satisfy the octet rule for C because C only has four valence electrons. Therefore, two lone electron pairs from the N atom must be moved to form two more bonds with C, creating a triple bond between C and N. To make it easier to visualize, bonding electron pairs are represented as lines. You should be familiar with both dot and line notation for bonds.

To determine if a Lewis structure is representative of the actual arrangement of atoms in a compound, one must calculate the formal charge of each atom. In doing so, assume a perfectly equal sharing of all bonded electron pairs, regardless of actual differences in electronegativity. In other words, assume that each electron pair is split evenly between the two nuclei in the bond. The difference between the number of electrons assigned to an atom in a Lewis structure and the number of electrons normally found in that atom’s valence shell is the formal charge.1

where V is the normal number of electrons in the atom’s valence shell, Nnonbonding is the number of nonbonding electrons, and Nbonding is the number of bonding electrons (double the number of bonds because each bond has two electrons). The charge of an ion or compound is equal to the sum of the formal charges of the individual atoms comprising the ion or compound. It may be possible to draw two or more Lewis structures that demonstrate the same arrangement of atoms but that differ in the specific placement of the electrons. These are called resonance structures and are represented with a double-headed arrow between them. The actual electronic distribution in the compound is a hybrid, or composite, of all of the possible resonance structures.

When two or more atoms with similar electronegativities interact, the energy required to form ions through the complete transfer of one or more electrons is greater than the energy that would be released upon the formation of an ionic bond. That is, when two atoms of similar tendency to attract electrons form a compound, it is energetically unfavorable to create ions. Rather than transferring electrons to form octets, the atoms share electrons. The binding force between the atoms is not ionic; instead, there is an attraction that each electron in the shared pair has for the two positive nuclei of the bonded atoms. This is known as covalent bond. It results in the overlap of the electron orbitals.  There are two types of covalent bonds: sigma and pi bonds. Sigma (s or σ) bonds are single bonds and they also make up the first bond of double and triple bonds.2 Pi (p or π) bonds are double and triple bonds and they make up the second bond in a double bond, and both the second and the third bond in a triple bond. Hybrid orbitals are produced by hybridizing (mixing) electron orbitals to produce geometries that facilitate bonding. There are 3 general types of hybrid orbitals: Sp3, Sp and Sp2. The Sp3 orbital is a hybrid between one sigma (s) with 3 pi (p) orbitals and it is tetrahedral in geometry. It contains single bonds only. The Sp2 orbital is a hybrid between one (s) with 2 (p) orbitals. It is trigonal planar in geometry and contains a double bond. The Sp orbital is a hybrid between one (s) with one (p) orbital. It is linear in geometry and contains a triple bond. Hybrid orbitals are most commonly used with carbon as the center atom. 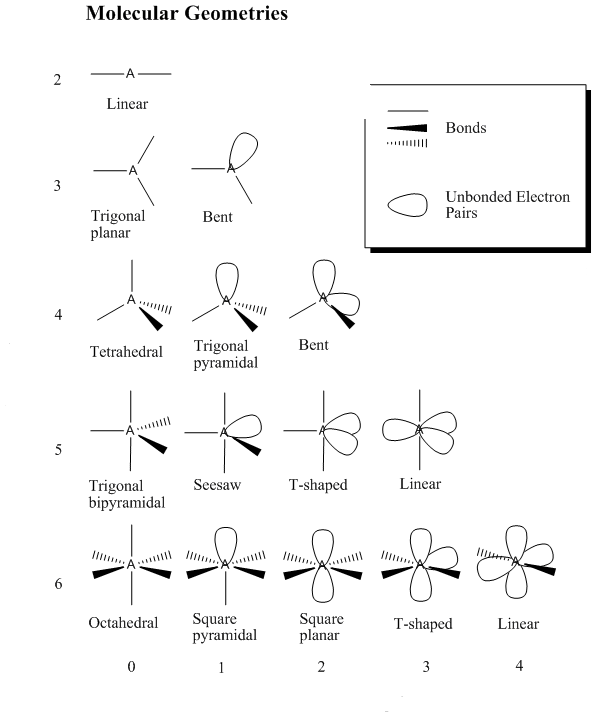 The common Lewis structures for some common molecules are given below: 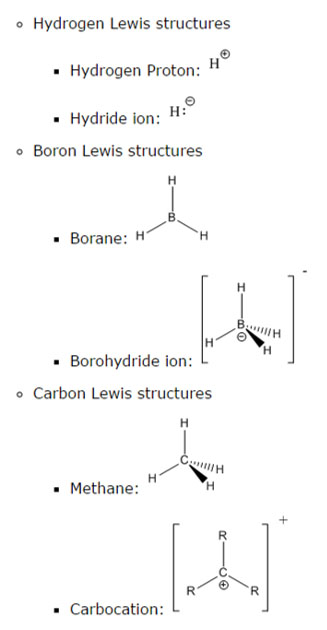 Lewis structures for elements in the same column (group) of the periodic table are similar to one another. For example, sulfur can be substituted for oxygen in lewis structures of oxygen. The structural formulas for molecules involving H, C, N, O, F, S, P, Si, Cl are given below:

In ions, resonance and electron delocalization occurs to “distribute” the charge around.

In molecules, resonance and electron delocalization occurs in aromatic rings and conjugated double bonds. Bond length is the average distance between the two nuclei of atoms in a bond. As the number of shared electron pairs increases, the two atoms are pulled closer together, resulting in a decrease in bond length. Thus, for a given pair of atoms, a triple bond is shorter than a double bond, which is shorter than a single bond. Bond energy is the energy required to break a bond by separating its components into their isolated, gaseous atomic states. The greater the number of pairs of electrons shared between the atomic nuclei, the more energy is required to break the bonds holding the atoms together. Thus, triple bonds have the greatest bond energy, and single bonds have the lowest bond energy. By convention, the greater the bond energy is, the stronger the bond. Multiple bonding decreases bond length but increases bond energy. Multiple bonding increases rigidity in molecular structure. Single bonds can rotate, but double and triple bonds can’t. Even partial double bonds like those found in the peptide bond prevents free rotation. 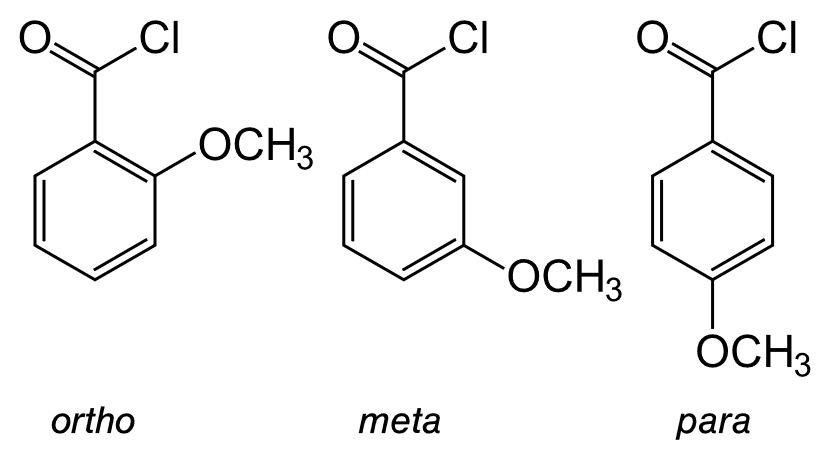 Functional isomers have structural isomers that have different functional groups. 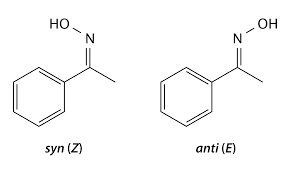 Conformational isomers have the same molecular formula, same connectivity, same stereochemistry, but can rotate about a single bond to switch between different conformations.

Technically, conformational isomers are not really isomers because you don’t have to break any bonds to convert from one conformation to another. They are more accurately called conformers.3

Light is an electromagnetic (EM) wave and electromagnetic waves are waves of electric and magnetic fields that are in phase, but perpendicular to each other and also to the direction of propagation. Normal light has the EM fields in all directions but polarized light has EM fields all in one direction. Chiral molecules containing a single enantiomer will rotate polarized light (to varying degrees) either to the left or to the right. This is why chiral molecules are said to be optically active. The sign (-), or l or levorotatory is used to denote a left rotation. The sign (+), or d or dextrorotatory is used to denote a right rotation.  The signs (+) or (-) does not correspond to R/S configurations. Also, d and l is not the same as D and L. The upper case letters denote absolute configurations in sugars.

You first assign priority to the four substituents, looking only at the atoms directly attached to the chiral center. The higher atomic number takes priority over lower atomic number. If the atomic numbers are equal, priority is determined by the combination of the atoms attached to these atoms; if there is a double bond, it is counted as two individual bonds to that atom. If a tie is encountered, work outward from the stereocenter until the tie is broken. When assigning priority, look only at the first atom attached to the chiral carbon, not at the group as a whole. The higher the atomic number of this first atom, the higher the priority. Next is to then orient the molecule in three-dimensional space so that the atom with the lowest priority (usually a hydrogen atom) is at the back of the molecule.3 Another way to think of this is to arrange the point of view so that the line of sight proceeds down the bond from the asymmetrical carbon atom (the chiral center) to the substituent with lowest priority. Now, imagine drawing a circle connecting the substituents from number 1 to 2 to 3. Pay no attention to the lowest-priority group as it can be skipped if it projects directly into the page. If the circle is drawn clockwise, the asymmetric atom is called (R) (Latin: rectus, “right”). If it is counterclockwise, it is called (S) (sinister, “left”), Once the (R)/(S) designation has been determined, the name can be written out. (R) and (S) are put in parentheses and separated from the rest of the name by a hyphen. If we have a compound with more than one chiral center, location is specified by a number preceding the R or S within the parentheses and without a hyphen. If only 1 chiral center then: (R/S)-molecule, where R/S is the absolute configuration and molecule is the name of the compound. For example, (R)-2-hydroxyl-propanal. If more than 1 chiral center then: (#R/S, #R/S)-molecule, where # is the carbon number (in ascending order), R/S is the absolute configuration, and molecule is the name of the compound. For example, (2R,3S)-2,3,4-hydroxyl-butanal.

The (E) and (Z) nomenclature is used for compounds with polysubstituted double bonds. Recall that simpler double-bond-containing compounds can use the cis–trans system. To determine the (E)/(Z) designation, one starts by identifying the highest-priority substituent attached to each double-bonded carbon. Using the Cahn–Ingold–Prelog priority rules, priority is assigned based on the atom bound to the double-bonded carbons: the higher the atomic number, the higher the priority. If the atomic numbers are equal, priority is determined by the next atoms outward; again, whichever group contains the atom with the highest atomic number is given top priority. If a tie remains, the atoms in this group are compared one-by-one in descending atomic number order until the tie is broken. The alkene is named (Z) if the two highest-priority substituents on each carbon are on the same side of the double bond and (E) if they are on opposite sides