The circulatory system includes your heart, blood vessels and blood. The circulatory system is responsible for delivering oxygen and nutrients to every cell, tissue and organ in the human body. It is also responsible for the transport of immune cells, electrolytes, hormones and other vital substances throughout your body. It includes the pulmonary circulation, which means the blood passes through the lungs where blood is oxygenated; and the systemic circulation, where it then passes through the rest of the body to provide oxygenated blood. Pulmonary circulation is shorter than systemic circulation and contains less resistance as well as less blood pressure. Systemic circulation undergoes vasodilation when oxygen levels are low which carries more blood flow to oxygen-starved tissue.
The human body is too large to rely solely on diffusion to move materials throughout their bodies. Over long distances, substances are transported more efficiently by mass flow or the bulk movement of substances from one area to another. The circulatory system provides the most important means of mass flow in humans. Blood consists of plasma, red blood cells, white blood cells, and platelets. Also, the digestive system works with the circulatory system to provide the nutrients the system needs to keep the heart pumping. The circulatory system directly communicates with the lymphatic system as well. The cardiovascular systems of humans are closed, meaning that the blood never leaves the network of blood vessels. In contrast, oxygen and nutrients diffuse across the blood vessel layers and enter interstitial fluid, which carries oxygen and nutrients to the target cells, and carbon dioxide and wastes in the opposite direction.

The heart functions as a pump to effectively circulate oxygenated blood to the body and deoxygenated blood to the lungs. In the human heart there is one atrium and one ventricle for each type of circulation, and with both a systemic and a pulmonary circulation there are four chambers in total: left atrium, left ventricle, right atrium and right ventricle. The right atrium is the upper chamber of the right side of the heart. The blood that is returned to the right atrium is deoxygenated and it is passed into the right ventricle to be pumped through the pulmonary artery to the lungs for re-oxygenation and removal of carbon dioxide. The left atrium receives newly oxygenated blood from the lungs as well as the pulmonary vein which is passed into the strong left ventricle to be pumped through the aorta to the different organs of the body. The coronary circulation system provides a blood supply to the heart muscle itself. The coronary circulation begins near the origin of the aorta by two arteries: the right coronary artery and the left coronary artery. After nourishing the heart muscle, blood returns through the coronary veins into the coronary sinus and from this one into the right atrium. Hormones released by endocrine glands also circulate the blood in order to reach their target cells. Fluids and ions circulate in the blood and are regulated by how much reabsorption of water and salt occurs in the kidney.

The blood vessels are one of the most important circulatory system organs. The blood vessels allow blood to flow quickly from one region to another and then allow it to come back to your heart. The size of the vessels increases with an increase in the amount of blood that passes through the vessel. Blood vessels have a hollow area that allows for easy flow of blood called the lumen. There is a wall around the lumen, which can be thick as it is in arteries or thin as it is in capillaries. All the blood vessels have a thin layer of squamous epithelium that prevents clots from forming. The layer is called endothelium and ensures that your blood cells stay inside the vessels all the time. There are three basic types of blood vessels: capillaries, arteries and veins. The thick-walled arteries take oxygen-rich blood away from the heart and the thin-walled veins take oxygen-deficient blood back towards the heart. The walls of the artery are thick as the blood leaves the heart under high pressure while veins have thin walls as the blood from the various organs are under low pressure. There are valves throughout the veins of the body, which prevents backflow and keeps the blood flowing in one direction. Capillaries are very tiny blood vessels that form a connection between arteries and veins. The capillary walls facilitate the transfer of oxygen, nutrients and wastes in and out of your body. Diffusion is the major mechanism of gas and solute exchange in the capillaries, whether it is diffusion as a free molecule or bound to carrier proteins. 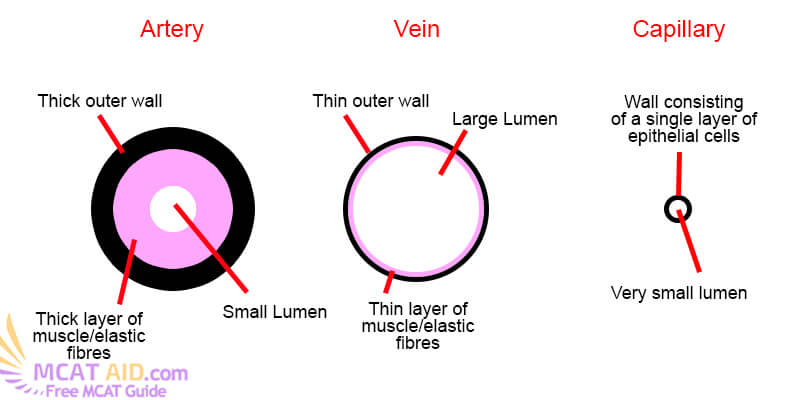 The mechanism of heat exchange in capillaries occurs through radiation, conduction and evaporative cooling. Radiation results in your body giving off infrared signal in the form of heat. Conduction also results in heat loss/gain by transferring the heat from the body to something you are touching or vice versa. Evaporative cooling is when you sweat and it cools you as it evaporates.

The plasma volume of the blood is helped regulated by blood osmolarity. When blood osmolarity is high, water goes into blood which causes a higher blood volume. When blood osmolarity is lower, water goes into tissues which causes a lower blood volume. ADH or vasopressin also helps to regulate plasma volume by increasing water reabsorption in the kidneys. Aldosterone is another biochemical which aids regulating the plasma volume by increasing salt reabsorption which leads to an increase in water reabsorption in the kidneys. Higher levels of carbon dioxide, high temperatures and lower pH will lower the oxygen affinity of hemoglobin. When a muscle works it results in a hot, acidic and high CO2 environment. To compensate, hemoglobin must unload its oxygen, and it does this by lowering its oxygen affinity.

Red blood cells or erythrocytes are non-nucleated cells that take oxygen from your lungs and transport it to the rest of your body’s cells. After delivering the oxygen, it gathers up the carbon dioxide and delivers it back to your lungs. Human red blood cells are produced through a process named erythropoiesis, developing from committed stem cells to mature red blood cells in about 7 days. When matured, in a healthy individual, these cells live in blood circulation for about 100 to 120 days. At the end of their lifespan, they are removed from circulation by the spleen, liver and bone marrow. White blood cells or lymphocytes are blood cells that play a role in fighting off germs and protect you from diseases. The body produces more white blood cells when there is an infection to deal with. Platelets or thrombocytes are blood cells that help to stop bleeding from a wound. When an opening or cut has been made to the body, platelets start accumulating at the opening and plug up the hole to stop bleeding. Liver produces clotting factors (eg. fibrinogen), which circulates in blood plasma. Once the platelets start sticking to the opening of a damaged blood vessel, they start attracting more fibers, platelets and other blood cells to prevent excessive bleeding. Eventually the clot contracts and gets compact. After the wounded blood vessel repairs itself, the clot dissolves. There is another component of blood known as plasma and it is made in the liver. It is the liquid part of blood and about half of blood is made of this substance. The plasma transports the blood cells and many other components throughout the body.