Carbohydrates are defined as aldehydic or ketonic compounds with some number of oxydrilic groups. Some carbohydrates, in addition to carbon, oxygen and hydrogen, include nitrogen or sulfur. On the basis of the number of forming units, three major classes of carbohydrates can be defined: monosaccharides, oligosaccharides and polysaccharides.

The suffix –ose is often used in describing and naming carbohydrates. For example, a carbohydrate with 6 carbons is called a hexose, a carbohydrate with an aldehyde as its carbonyl unit is called an aldose and a carbohydrate with a ketone as its carbonyl unit is called a ketose. The prefix “deoxy” means that the carbohydrate has an -H in place of an -OH at a certain position. The absolute configuration of carbohydrates is assigned based on the chirality of the carbon atom furthest from the carbonyl group. In order to be classified as a carbohydrate, a molecule must have at least a 3 carbon backbone, an aldehyde or ketone group and at least 2 hydroxyl groups.4 The simplest, smallest carbohydrates are glyceraldehyde and dihydroxyacetone. The 3 common monosaccharides are glucose, fructose, and galactose. Glucose is our blood sugar and the product of photosynthesis. Fructose is the sugar in fruits, and it is sweeter than glucose. Galactose is one of the monomers that make up lactose, which is the sugar in milk; it is less sweet than glucose. The sugar that make up RNA is ribose, and for DNA it is deoxyribose (More precisely it’s 2′-deoxyribose because the difference is at the 2 carbon). Sucrose is a disaccharide made from α-glucose and β-fructose joined at the hydroxyl groups on the anomeric carbons (making acetals). Sucrose is table sugar, the sugar we buy in stores.

Hexose is a monosaccharide with six carbon atoms, having the chemical formula C6H12O6. Hexoses are classified by functional group, with aldohexoses having an aldehyde at position 1, and ketohexoses having a ketone at position 2. The numbered carbons in the open-chain forms correspond to the same numbered carbons in the hemiacetal forms. The formation of the hemiacetal causes carbon number 1, which is symmetric in the open-chain form, to become asymmetric in the cyclic version. This means that both glucose and mannose (as well as all the other aldohexoses) each have two cyclic forms. In solution, both of these exist in equilibrium with the open-chain form. The open-chain form, however, does not crystallize. Hence the two cyclic forms become separable when they are crystallized.5 Carbohydrate ring structures can take several conformational structures as seen below:

The planar configuration has the highest energy but is the least stable, while the chair configuration has the lowest energy but is the most stable. The absolute configuration of all monosaccharides is denoted by the configuration at one particular stereocentre in that sugar, namely the stereocenter furthest from the anomeric center. The anomeric center is the carbonyl carbon in the open chain representation of the carbohydrate. If, in the Fischer projection, that centre has the hydroxyl group on the right, it is a D-sugar; if on the left, it is an L-sugar. By convention, the “D” and “L” symbols are written in common letters.

An anomer is a type of stereoisomer and epimer found in carbohydrate chemistry. While an epimer is a stereoisomer that differs in configuration at any single stereogenic center, an anomer is a cyclic saccharide and an epimer that differs in configuration, specifically at the hemiacetal/acetal carbon, also called the anomeric carbon. The anomeric carbon is the carbon derived from the carbonyl carbon (the ketone or aldehyde functional group) of the open-chain form of the carbohydrate molecule.

Hydrolysis is when a large molecule is split into smaller sections due to the action of water by breaking a bond, adding -H to one section and -OH to the other.4,5 The products are simpler substances. It involves the addition of water, hence why it is called hydrolysis, meaning splitting by water. The cleavage of glycosidic linkages of larger oligo- and polysaccharides is necessary to determine the monosaccharides that compose the larger carbohydrate. Hydrolysis—that is, the cleavage of a bond by the addition of the elements of a water molecule, is the most common method for the cleavage of glycosidic linkages. Hydrolysis is carried out in aqueous solutions with an acid catalyst, although some special-purpose hydrolyses, such as the liberation of carbohydrate chains from glycoconjugates, require alkaline catalysts. Common acid catalysts are hydrochloric, sulfuric, and trifluoroacetic acids. Glycosidic linkages may also be cleaved in other solvents such as methanol.

Keto–enol tautomerism refers to a chemical equilibrium between a keto form (a ketone or an aldehyde) and an enol (an alcohol). The enol and keto forms are said to be tautomers of each other. Tautomers are isomers of organic compounds that readily interconvert. This reaction commonly results in the relocation of a proton. The interconversion of the two forms involves the movement of an alpha hydrogen and the shifting of bonding electrons. A compound containing a carbonyl group (C=O) is normally in rapid equilibrium with an enol tautomer, which contains a pair of doubly bonded carbon atoms adjacent to a hydroxyl (−OH) group, C=C-OH. The keto form predominates at equilibrium for most ketones. Nonetheless, the enol form is important for some reactions. Normally, the keto–enol tautomerization chemical equilibrium is highly thermodynamically driven, and at room temperature the equilibrium heavily favors the formation of the keto form. 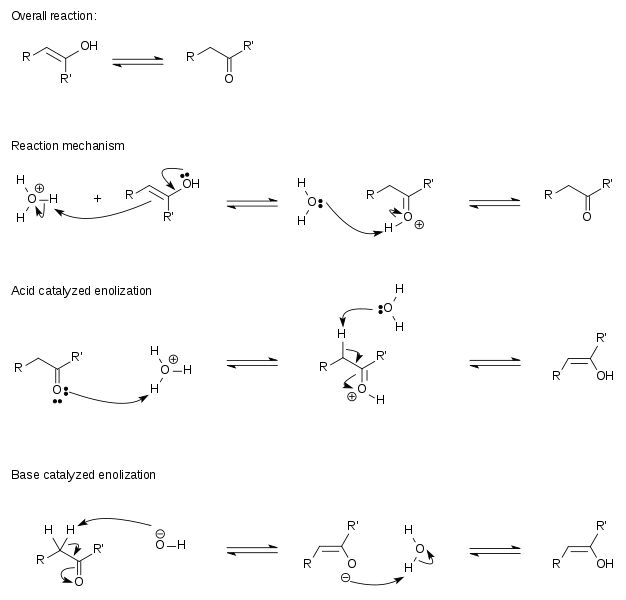