Protons are found in the nucleus of an atom and each proton has an amount of charge equal to the fundamental unit of charge (e = 1.6 × 10−19 C).1 We denote this fundamental unit of charge as “+1 e” or simply “+1” for the proton. Protons have a mass of approximately one atomic mass unit (amu). The atomic number (Z) of an element is equal to the number of protons found in an atom of that element. As such, it acts as a unique identifier for each element because elements are defined by the number of protons they contain. For example, all atoms of oxygen contain eight protons while all atoms of gadolinium contain 64 protons. While all atoms of a given element have the same atomic number, they do not necessarily have the same mass.

Neutrons are neutral as they have no charge. A neutron’s mass is only slightly larger than that of the proton, and together, the protons and the neutrons of the nucleus make up almost the entire mass of an atom. 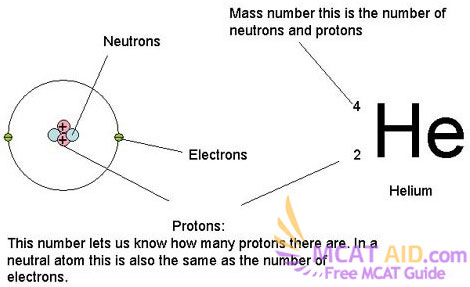 Electrons move through the space surrounding the nucleus and are associated with varying levels of energy. Each electron has a charge equal in magnitude to that of a proton, but with the opposite (negative) sign, denoted by “−1 e” or simply “–e.” The mass of an electron is approximately 1/2000 that of a proton. Because subatomic particles’ masses are so small, the electrostatic force of attraction between the unlike charges of the proton and electron is far greater than the gravitational force of attraction based on their respective masses. Electrons move around the nucleus at varying distances, which correspond to varying levels of electrical potential energy. The electrons closer to the nucleus are at lower energy levels, while those that are further out (in higher shells) have higher energy. The electrons that are farthest from the nucleus have the strongest interactions with the surrounding environment and the weakest interactions with the nucleus. These electrons are called valence electrons and they are much more likely to become involved in bonds with other atoms because they experience the least electrostatic pull from their own nucleus. Generally speaking, the valence electrons determine the reactivity of an atom. The sharing of these valence electrons in covalent bonds allows elements to fill their highest energy level to increase stability. In the neutral state, there are equal numbers of protons and electrons; losing electrons results in the atom gaining a positive charge, while gaining electrons results in the atom gaining a negative charge.

Mnucleons = mass of all the nucleons that make up the atom in their free, unbound state

Matom = mass of the atom

Certain isotopes are unstable and their nuclei break apart, undergoing nuclear decay. Sometimes the product of that nuclear decay is unstable itself and undergoes nuclear decay, too. Naturally occurring radioactive isotopes decay in three primary ways: Alpha particle emission, beta particle emission and gamma radiation emission.2 Alpha decay is the ejection of a helium nucleus at relatively low speed from a radioactive element. It is the weakest form of radiation and can be stopped by a sheet of paper.

Beta decay (negative) is the ejection of a high speed electron from a radioactive element. It has more energy than an alpha particle but it can be stopped by aluminium foil.

Gamma decay is the release of high energy electromagnetic wave from a radioactive element. It is the strongest form of radiation and it can be reduced by a thick layer of lead or concrete.

One tool used to identify specific atomic structures is mass spectroscopy, which is based on the concept that differences in mass cause differences in the degree of bending that occurs in a beam of ions passing through a magnetic field.

2) Richard Lawson. (1999, October). An Introduction to Radioactivity. Retrieved from