Amino acids are the building blocks of proteins. They create the protein’s primary structure. There are 20 naturally occurring amino acids.2 When two amino acids join they form a peptide bond. An alpha-carbon is so named because it is the first carbon attached to a functional group. In the case of amino acids, the α-carbon is also the central carbon, making up the backbone in a polypeptide chain with a bond to an amino group (NH2) on one side and a carboxyl group (COOH) on the other. As a tetrahedral atom, an amino acid’s α-carbon holds bonds to four substituents (the NH2, the COOH, the H, and the R group), thereby making it a chiral center in all but one amino acid, glycine, whose R group is a second hydrogen atom. The spatial organization of substituents around the chiral α-carbon determines the absolute configuration of the amino acid. The absolute configuration distinguishes between the amino acid’s two stereoisomers, which are non-superimposable mirror images

A covalent disulfide bond can form between the sulfur containing R-groups (CH2SH) on two cysteine molecules, producing the amino acid cystine. Disulfide bonds between cysteine residues can affect protein folding and stability. Amino acids form polypeptide chains via peptide bonds, which are formed when the amine of one amino acid forms a covalent amide bond with the carbonyl carbon on a second amino acid, releasing a molecule of H20 in the process. Peptide bond formation is thus an example of a dehydration synthesis reaction because of the generation of water as a result of the linkage. Breaking a peptide bond requires the addition of a hydrogen to one amino acid’s amine group and a hydroxyl to the other amino acid’s carbonyl carbon (the breaking of water), thus classifying it as a hydrolysis. The function of the protein is determined by its structure, therefore each layer is dependent on the next. .

Strecker amino acid synthesis is an organic reaction used to convert an aldehyde or ketone and a primary amine or ammonia to an α-amino acid using a metal cyanide, acid catalyst, and water.2 The mechanism begins with the acid catalyzed reaction of the carbonyl with the amine to give the corresponding imine. The imine is then attacked by the cyanide to provide a nitrile intermediate. The nitrile gets protonated by the acid, is attacked by a molecule of water and after a series of proton transfer steps results in an amide intermediate. In the reaction’s acid conditions, the amide gets protonated and the amine group is displaced by water to eventually yield the carboxylic acid group and the final amino acid product. A simplified reaction of the overall processes is shown below: 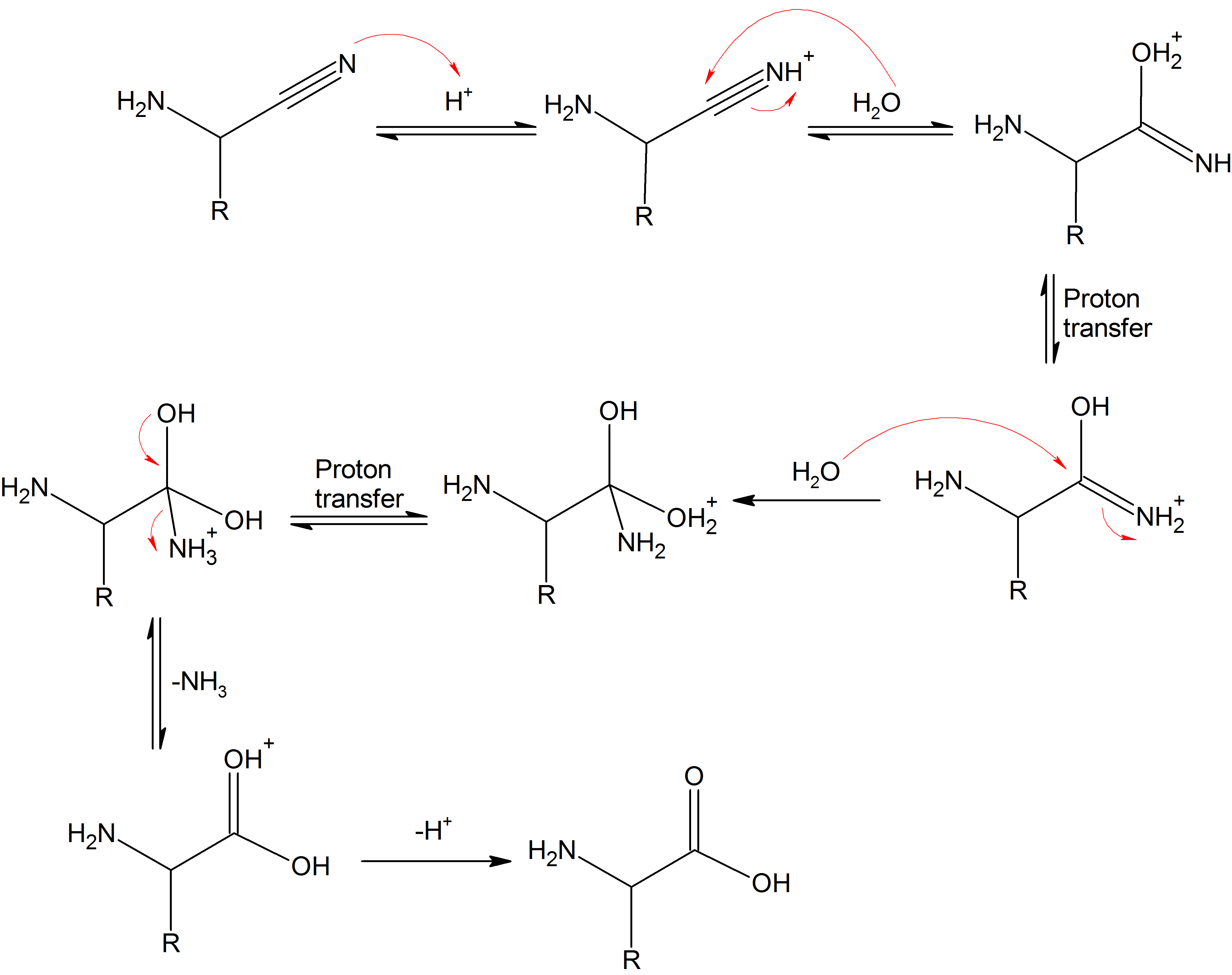 The Gabriel synthesis is a chemical reaction that transforms primary alkyl halides into primary amines. Traditionally, the reaction uses potassium phthalimide. Potassium phthalimide is a –NH2-synthon which allows the preparation of primary amines by reaction with alkyl halides. After alkylation, the phthalimid is not a nucleophile and does not react anymore. The product is cleaved by reaction with base or hydrazine, which leads to a stable cyclic product. A simplified reaction of the overall processes is shown below:

Hydrophobic interactions describe the relations between water and low water-soluble molecules. Hydrophobes are nonpolar molecules and usually have a long chain of carbons that do not interact with water molecules. Hydrophobic Interactions are important for the folding of proteins. This is important in keeping a protein stable and biologically active, because it allow to the protein to decrease in surface are and reduce the undesirable interactions with water.

Protein folding is a consequence of intermolecular forces, including pure ionic interactions, dipole interactions, hydrogen bonds, van der Waals forces and hydrophobic interactions. To be biologically active, a protein must adopt and maintain a specific conformation under physiological conditions. Hydrophobic interactions utilize both repulsion and attraction to contribute to a protein’s conformational stability. The repulsion comes from the thermodynamically favorable shielding of hydrophobic residues afforded by their location inside the protein. The attraction results from van der Waals forces between nonpolar side chains on the polypeptide which are amplified in the close quarters of a hydrophobic core and produce a greater affect in larger proteins. The solvation layer (or shell) describes the structured organization of a solvent (e.g. water) around a solute. In the case of a protein which displays hydrophobic residues on its surface, the surrounding water will orient into a highly structured organization to optimize hydrogen bonding among water molecules, as hydrogen bonding with the presented hydrophobic side chains is not an option). This highly ordered rearrangement has a much lower entropy and is less favorable than if polar side chains were present on the surface of the protein. Thus, a conformation that buries its hydrophobic residues inside the protein leads to less disruption of water’s hydrogen bonding, allowing for less structure and higher entropy, which increases the protein’s conformational stability. Temperature is one factor that affects proteins as spontaneous rearrangement at its melting temperature will occur. This affects the secondary, tertiary and quaternary structure. Adverse pH conditions can disrupt the ionic bonds and hydrogen bonds of proteins and this affects the secondary, tertiary and quaternary structure. High salt concentration     causes the disruption of non-covalent interactions and this affects the secondary, tertiary and quaternary structure. Certain solvents will result in the disruption of hydrogen bonding in protein and this also affects the secondary, tertiary and quaternary structure. Certain enzymes can lead to the hydrolysis of peptide bonds, which only affects the primary structure.

One role a protein may play is as a biological catalyst, or enzyme, which assists in accelerating a chemical reaction by lowering the activation energy of the reaction. Enzymes are of incredible biological importance but the biological utility of proteins also extends into non-enzymatic functions, such as structure (e.g. collagen), transportation (e.g. hemoglobin), regulation (e.g. peptide hormones), movement (e.g. myosin), and immune defense (e.g. antibodies). A special feature of some proteins is the capability to bind other molecules with non-covalent interactions. Protein binding can be characterized by its affinity and specificity for the binding target. Affinity describes how readily the protein binds its target, and specificity refers to the preferential binding of the target over other entities. A change in the protein’s conformation can alter affinity and specificity as seen in the control of voltage-gated ion channels in cell membranes. The high degree of protein variability allows for a key feature of the adaptive (or acquired) immune system, which is the production of antibodies. An antibody is a type of protein that has a unique and very specific binding site that will readily bind its target, called an antigen, such that its target is inactivated or tagged for immune response. A motor protein can perform mechanical work by coupling exergonic (energy releasing) ATP hydrolysis to a conformational change that allows for interaction with the protein’s target substrate. Muscle contraction, for example, is achieved through a process of the motor protein myosin binding and releasing its microfilament (actin) substrate. Myosin also acts on microfilaments of the cytoskeleton to generate cellular movement.

Two other types of motor proteins, kinesins and dyneins, act on microtubules and play a role in transport within the cell. Kinesin walks microtubule tracks to deliver cellular cargo (e.g. chromosomes during mitosis), generally in an antegrade direction (center to periphery). Dynein is used in retrograde cargo transport in the axons of neurons, and is capable of sliding microtubules in relation to one another, generating the movement of cilia and flagella.