A ketone is a functional group under the general groups of carbonyls. In a ketone, the carbonyl carbon is doubly-bonded to an oxygen, and single bonded to two alkyl groups, which can be either identical or different. In terms of functional group priority, ketones take priority over everything but carboxylic groups and aldehydes. If an aldehyde or carboxylic acid group is there, the ketone is no longer the highest priority and thus, becomes an oxo- prefix. The longest carbon chain which contains the carbonyl compound is first counted and the chain is named according to normal IUPAC rules. The chain is then numbered such that the carbonyl carbon has the lowest number. The oxygen is then designated in the name with the number of the carbon it is on. The suffix of ketones is “-one” so the “e” in the alkyl chain is replaced with “-one.” The aldehyde is a functional group underneath the general group known as carbonyls. An aldehyde is a compound which contains a terminal carbon that is bound to a generic “R” group, doubly bonded to an oxygen, and single-bonded to a hydrogen. The “R” group is normally a simple aliphatic chain. Aliphatic compounds are acyclic or cyclic, non-aromatic carbon compounds. When the “R” group of an aldehyde is hydrogen, the resulting aldehyde is the simplest one, and is known as formaldehyde. The carbon doubly bound to the oxygen is labeled as the alpha-carbon. Thus, the hydrogen bound to that carbon is the alpha-hydrogen. Because of the resonance stabilization from the carbonyl oxygen, the hydrogen is more acidic and has a pKa around 17. To name molecules with aldehyde functional groups you locate the longest carbon chain in the molecule that contains the aldehyde group and name it as if it were an alkane. The -e ending of the alkane is then replaced with –al. Because aldehydes are always at the terminal end of the chain their carbonyl carbon is labeled 1. The remaining functional groups in the chain is then named. 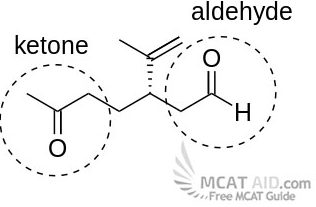 Ketones and aldehydes are compounds that contain a carbonyl group (a carbon-oxygen double bond) and they do not have reactive groups like −OH or −Cl attached directly to the carbon atom in the carbonyl group, unlike carboxylic acids containing –COOH. Aldehydes and ketones are characterized by the carbonyl group (C=O) and this polar bond gives the carbon a partial positive charge and the oxygen a partial negative charge. The dipole moment associated with the carbonyl group causes an elevation of boiling points associated with their alkane counterparts in solution. The boiling points of aldehydes and ketones are less than carboxylic acids however. The elevation of boiling point is not as high as alcohols because there is no hydrogen binding. Aldehydes are more reactive towards nucleophiles than ketones. The infrared spectroscopy of the C=O bond of aldehydes and ketones usually falls around 1700 cm-1. When substituents are added to either side of a carbonyl group, reactivity will be reduced because reagents will have a more difficult time getting to the carbonyl group. This process is called steric hinderance. More and larger substituents near the carbonyl group will decrease reactivity further. Nucleophilic addition reactions usually occur at the C=O double bond. Acids and bases can be used to catalyze hemiacetal and acetal formation reactions. Hemiacetals are created when aldehydes and ketones react with 1 equivalent of alcohols and acetals are created when aldehydes and ketones react with 2 equivalent of alcohols. Imines are very common molecules in nature, for example Vitamin B6 helps deaminate amino acids through the process of imine formation. The reaction of a ketone with a halogen leads to the halogenation of the alpha position (carbon directly next to the carbonyl (C=0) group). The reaction of a methylketone with a halogen leads to the formation of a haloform and carboxylate. A tri-halogenated methyl group is good leaving group for this reaction as there are 3 very strong electronegative elements and a weak methyl one that can be easily pulled away. An aldol condensation reaction occurs because of the acidic alpha proton. The reaction of two acetaldehyde molecules creates an aldo molecule. Aldol condensation is compatible with reactions involving carbonyl compounds with an acidic alpha proton. Aldehydes can be oxidized further from this step of the reaction to create carboxylic acids while ketones cannot be oxidized any further.

The alpha hydrogens are acidic because the resulting carbanion is stabilized by resonance. Alpha beta unsaturated carbonyl compounds, their resonance structures. The α, β-unsaturated carbonyls will react with a nucleophile will result in the addition of the nucleophile at the β position. A nucleophile attacks the beta hydrogen, pushing the α, β-unsaturated carbonyl into the enol form, which tautomerizes to the original carbonyl. Acetoacetic ester synthesis is a reaction where acetoacetic ester is used to synthesize a new ketone. An acidic alpha proton comes off and the resulting carbanion attacks new R group. Hydrolysis of the ester turns it into a β-keto carboxylic acid. β-keto acids undergo decarboxylation because the β-keto group stabilizes the resulting carbanion via enol formation. Enol converts back to keto form, and the net result of this reaction is that an R group is made to attach to the α carbon of acetone.