An alcohol is any oxygen containing organic compound with the general formula R-OH. Alcohols are either given the prefix hydroxyl or hydroxy. Alcohols are named in the IUPAC system by replacing the –e ending of the root alkane with the ending –ol. The carbon atom attached to the hydroxyl group must be included in the longest chain and receives the lowest possible number. Alternatively, the alkyl group can be named as a derivative, followed by the word alcohol, as in the case of ethyl alcohol.

Boiling points of alcohols are significantly higher than those of structurally isomeric hydrocarbons due to hydrogen bonding. Molecules with more than one hydroxyl group show increased levels of hydrogen bonding. Phenyl alcohols, or phenols, are more acidic than normal alcohols. Alcohols are usually water soluble if they are not attached to a hydrophobic molecule. Hydrogen bonding is the main reason alcohols tend to have higher boiling points analogous organic compounds. The table below compares the acidity of alcohols with other groups of oxygen-containing compounds.

A lower pka denotes a higher acidity to the compound. Additional branching on an alcohol will decrease the melting point and boiling point. The infrared spectroscopy of the OH group occurs around 3300 cm-1 due to the high energy hydrogen bond.

Substitution reactions can either be classified as SN1 or SN2, depending on the alcohol and derived alkyl halide involved. All substitution reactions must have a good leaving group. SN1 reactions only involve one molecule and an intermediate carbocation is usually formed during the process. Alcohol substitution reactions will be SN1 when the alcohol is protonated, which creates a water intermediate, a good leaving group. Factors that favor SN1 are protic solvents, stable carbocation and tertiary central carbon. A protic solvent is a solvent that has a hydrogen atom bound to an oxygen (as in a hydroxyl group) or a nitrogen (as in an amine group). It can refer to any solvent that contains labile H+ is called a protic solvent. The molecules of such solvents readily donate protons to reagents. A carbocation is an ion with a positively charged carbon atom. SN2 reactions involve two molecules and there is usually no transition state. A sample of an alcohol SN2 reaction is the conversion of the alcohol into a tosylate (p-toluenesulfate) group and the formation of inorganic ester intermediates. Factors that favor SN2 are aprotic polar solvent, unstable carbocation and primary central carbon. Aprotic solvents cannot readily donate hydrogen unlike a protic solvent. Phenols readily undergo electrophilic aromatic substitution reactions because the lone pairs on the oxygen donate electrons to the ring, hydroxyl (-OH) group is thus a strongly activating, ortho/para-directing ring substituent. Oxidation is the loss of electrons while reduction the gain of electrons. Primary alcohols can be oxidized to carboxylic acids through either potassium permanganate (KMnO4) or CrO3. Primary alcohols can be also be oxidized to aldehydes through PCC (pyridium chloro-chromate). Secondary alcohols always oxidize to a ketone and tertiary alcohols never oxidize. Alcohols can be protected during reactions by adding certain protecting groups such as trimethylsilyl.

Alcohols are very versatile functional groups that participate in a variety of reactions. They can be deprotonated with base (making them good nucleophiles in substitution reactions), protonated (making them good leaving groups in substitution and elimination reactions), oxidized to aldehydes or ketones, or transformed into better leaving groups (alkyl halides, or alkyl tosylates) allowing for a host of substitution and elimination reactions. All this this versatility comes with a drawback, however. Sometimes alcohol functional groups can get in the way of other reactions we might like to do. In the nucleophilic substitution (SN2) of alkyl halides with acetylides, the below reaction normally occurs:

If the substrate is modified a bit with a hydroxyl group (OH) at the end of the molecule, we will get a different result: 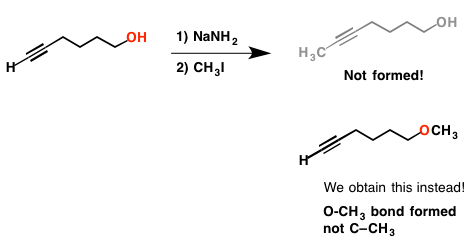 A new O-CH3 bond was formed instead of a C-C bond. This is because our strong base NaNH2 deprotonated the strongest acid and the resulting alkoxide then attacked CH3-I, resulting in a substitution reaction with displacement of iodide ion. The hydroxyl group has a pKa of 16 versus acetylide which has a pKa of 25. A protective alcohol group helps to mask the reactivity of the OH group, be inert to a large set of reaction conditions, and be easily and selectively removed to reveal the OH group once we’re done. An example of a protective group is an ether. Ethers are inert to pretty much any other reaction condition, which means that it can protect a hydroxyl group as an ether without worrying about it being affected by reactions we might like to do on the rest of the molecule (like addition of an acetylide). One drawback of using ethers, is that it requires very harsh conditions in order to break such as the use of hydroiodic acid. Such conditions will likely destroy whatever other functional groups are on the molecule.

Instead of making a typical ether, we can form a silyl ether (i.e. make an O-Si bond, not an O–C bond). It’s even easier to form than a typical ether and it shares the property of being inert to many types of reaction conditions. In most introductory courses the most common silyl ether used is trimethylsilyl (TMS) although there are others. The main advantage of silyl ethers is that they’re easily cleavable. The Si-F bond is unusually strong, even stronger than Si-O.  Addition of a source of fluoride ion will lead to cleavage of Si-O bonds without affecting the rest of the molecule.  A typical source of fluoride ion is the salt tetrabutylammonium fluoride (TBAF). 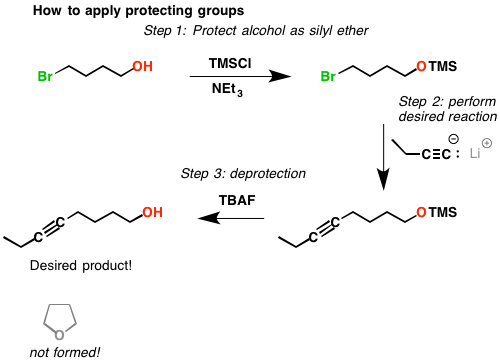