Acids and bases can be found anywhere, from the orange that we eat to the soap that we shower with. Modern definitions are concerned with the fundamental chemical reactions common to all acids.

The Arrhenius theory of acids and bases was originally proposed by the Swedish chemist Svante Arrhenius in 1884. He suggested classifying certain compounds as acids or bases based on what kind of ions formed when the compound was added to water. An Arrhenius acid is a substance that, when added to water, increases the concentration of H+ ions in the water. Although the hydrogen ion is often written as H+(aq) when describing acid-base reactions, the free hydrogen nucleus, a proton, does not exist alone in water but it exists as the hydronium ion, H3O+. Thus, an Arrhenius acid can also be described as a substance that increases the concentration of hydronium ions when added to water. Examples include molecular substances such as HCl and acetic acid.

A major limitation of Arrhenius theory is that we can only describe acid-base behavior in water. Using the Brønsted-Lowry definition, an acid-base reaction is any reaction in which a proton is transferred from an acid to a base. We can use the Brønsted-Lowry definitions to discuss acid-base reactions in any solvent, as well as those that occur in the gas phase. For example, consider the reaction of ammonia gas with hydrogen chloride gas to form solid ammonium chloride:

Brønsted-Lowry theory of acid and bases took the Arrhenius definition one step further, as a substance no longer needed to be composed of hydrogen H+ ions in order to be classified as an acid. Note that water can act as either an acid or a base. Such substances are called ampholytes, and are amphoteric.

Most acids encountered in everyday life are aqueous solutions, or can be dissolved in water, so the Arrhenius and Brønsted-Lowry definitions are the most relevant.

The self-ionization of water (also autoionization of water, and autodissociation of water) is an ionization reaction in pure water or in an aqueous solution, in which a water molecule, H2O, deprotonates (loses the nucleus of one of its hydrogen atoms) to become a hydroxide ion, OH−. The hydrogen nucleus, H+, immediately protonates another water molecule to form hydronium, H3O+. It exemplifies the amphoteric nature of water. However, the hydroxonium ion is a very strong acid, and the hydroxide ion is a very strong base; in fact, they are the strongest in water. As fast as they are formed, they react to produce water again. The net effect is that an equilibrium is set up:

For this equation, we can find K, the equilibrium constant:

Taking the square root of each side gives:

Converting that into pH:

That’s where the familiar value of 7 comes from.

The formation of hydroxonium ions and hydroxide ions from water is an endothermic process. Hence, the forward reaction, as written, “absorbs heat”. According to Le Châtelier’s Principle, if you make a change to the conditions of a reaction in dynamic equilibrium, the position of equilibrium moves to counter the change you have made. Hence, if you increase the temperature of the water, the equilibrium will move to lower the temperature again. It will do that by absorbing the extra heat. That means that the forward reaction will be favored, and more hydrogen ions and hydroxide ions will be formed. The effect of that is to increase the value of Kw as temperature increases.

Conjugate Acid and Base

In this example, sulfuric acid (H2SO4) is an acid because it “donates” H+ to the water. It becomes the hydrogen sulfite ion (HSO−4) which is the conjugate base of sulfuric acid.

The same idea applies to a base:

Ammonia (NH3) is a base because is “accepts H+ from water to come its conjugate acid, the ammonium ion (NH4+).

Essentially, for a strong acid, none of the non-ionized acid remains. Acid strength is determined by the amount of that acid that actually ionizes. Acids are molecular covalent compounds which you don’t expect to ionize. The strongest acids ionize 100% in aqueous solution. There are 6 that most consider to be the strong acids: hydrochloric acid (HCl), hydroiodic acid (HI), hydrobromic acid (HBr), perchloric acid (HClO4), nitric acid (HNO3) and sulfuric acid (H2SO4). These split apart 100%.  All other acids are weak acids and ionize to a much lesser amount. For example, acetic acid, like most weak acids, ionizes, 5%. At equilibrium, both the acid and the conjugate base are present in solution.

A strong base is something like sodium hydroxide or potassium hydroxide which is fully ionic. You can think of the compound as being 100% split up into metal ions and hydroxide ions in solution.

A weak acid is one which doesn’t ionise fully when it is dissolved in water. Ethanoic acid is a typical weak acid. It reacts with water to produce hydroxonium ions and ethanoate ions, but the back reaction is more successful than the forward one. The ions react very easily to reform the acid and the water.

However, the reaction is reversible, and at any one time about 99% of the ammonia is still present as ammonia molecules. Only about 1% has actually produced hydroxide ions.

A salt is a compound formed by neutralization reaction between an acid and a base. They generally ionize in water producing cations and anions. The cations or anions formed during ionization of salts either exist as hydrated ions in aqueous solutions or interact with water to regenerate the acids and bases. The process of interaction between cations or anions of salts and water is known as hydrolysis of salts. On the basis of hydrolysis, salts are divided into three categories: acidic salts, basic salts, neutral salts.

Salts formed by the neutralization of strong acid and strong base are neutral in nature as the bonds in the salt solution will not break apart. They generally get hydrated but do not hydrolyse. Therefore, such salts are generally known as neutral salts. Sodium chloride (NaCl) is an example of a neutral salt.

Salts formed by the neutralization of weak acid and strong base are basic in nature. For example: CH3COONa

As we know acetic acid is a weak acid, it remains unionized in the solution. This results in an increase in concentration of OH− ions which makes the solution alkaline. pH of the solution is greater than7.

As we know ammonium hydroxide is a weak base, it remains unionized in the solution. This results in an increase in concentration of H+ ions which makes the solution acidic. pH of such solutions is less than 7.

Salts formed by the neutralization of weak acid and weak base are acidic, basic or neutral depending on the nature of acids and bases involved. For example: CH3COONH4. General mechanism forthe hydrolysis of ions formed from these salts:

Degree of hydrolysis in such cases is independent of concentration of solution and pH of such solutions is given by:

Ka, or the acid dissociation constant, is a quantitative measure of the strength of an acid in solution. For a monoprotic weak acid:

Kb, or the base dissociation constant, is a quantitative measure of the strength of a base  in solution. For a weak base: 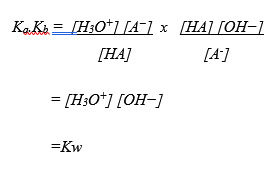 For many practical purposes it is more convenient to discuss the logarithmic constant, pKa

The lower the value for pKa, the stronger the acid.

The lower the value of pKb, the stronger the base.

If Ka> Kb the solution of the salt is acidic.

If Ka= Kb the solution of the salt is neutral.

If Ka < Kb the solution of the salt is basic.

A buffer solution is an aqueous solution consisting of a mixture of a weak acid and its conjugate base or vice versa. Its pH changes very little when a small amount of strong acid or base is added to it. Buffer solutions are used as a means of keeping pH at a nearly constant value in a wide variety of chemical applications. A buffer system consists of an equilibrium between an acidic species and a basic species. You can’t just mix HCl and NaOH together and expect buffering, because neutralization will occur and the acidic species and the basic species won’t be at an equilibrium. The concept is that acidic species of the buffer system will donate protons to resist increases in pH, while the basic species of the buffer system will accept protons to resist decreases in pH, in accordance to Le Châtelier’s principle. Buffer systems formed by weak acids have maximum buffering capacity at the pH = pKa of the acid. The maximum buffer capacity is probably best defined as the amount of acid or base that can be added to a system before the pH changes beyond that of what the system can tolerate. In some cases this may be 0.1 pH units. In other cases it may be a full pH unit.

When [acid] = [conjugate base], the system is buffered at pH = pKa of the acid.

Buffer systems formed by weak bases have maximum buffering capacity at the pH = 14 – pKb of the base.

When you carry out a simple acid-base titration, you use an indicator to tell you when you have the acid and alkali mixed in exactly the right proportions to “neutralise” each other. When the indicator changes colour, this is often described as the end point of the titration. Buffers make the titration curve flat at the region where buffering occurs because the addition of base or acid does not affect the pH of the solution drastically. On a titration curve, this is the point of inflection. The point of inflection is at pH = pKa (or 14 – pKb) of the buffer. The area around the point of inflection is the region where the solution has buffering capacity. The pH of this buffering region is typically pKa ± 1 (or 14 – pKb ± 1). 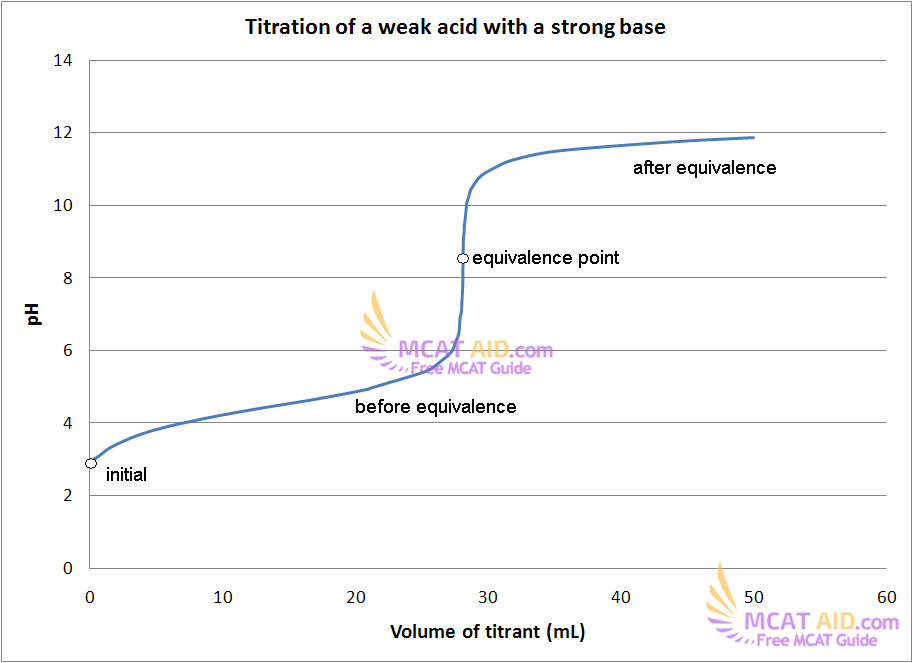 4) California, U. o. (2016, December 14). The Formation of Complex Ions. Retrieved from    https://chem.libretexts.org/Textbook_Maps/General_Chemistry_Textbook_Maps/Map%3A_Chemistry_(Averill_and_Eldredge)/17%3A_Solubility_and_Complexation_Equilibria/17.3%3A_The_Formation_of_Complex_Ions